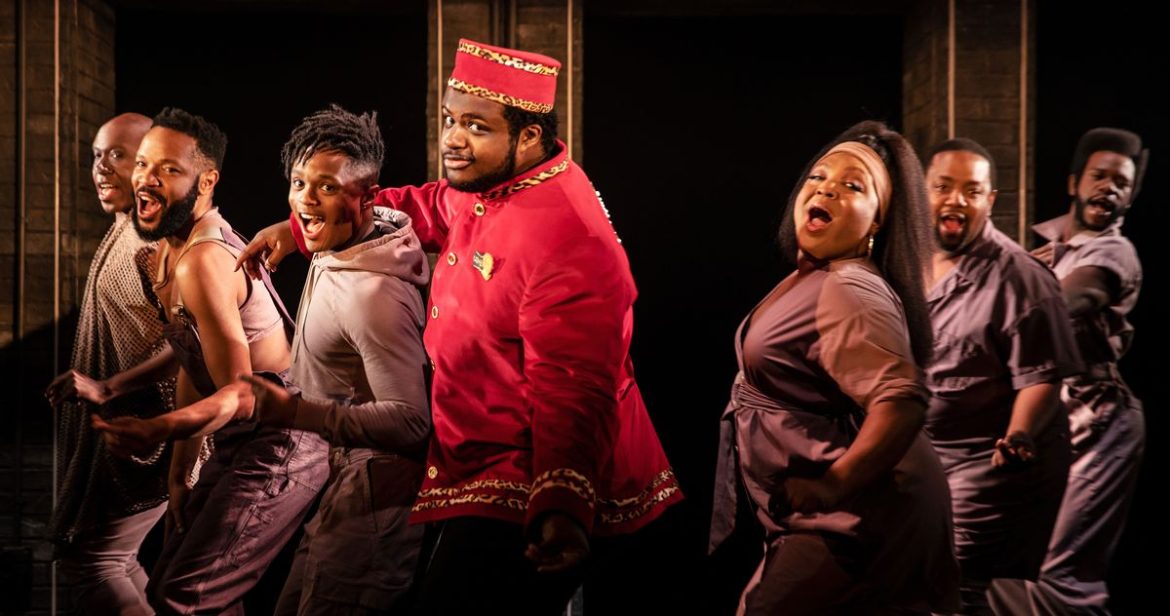 In the course of A Strange Loop, Michael R. Jackson’s “Big Black and Queer-Ass American Broadway” show, he gives two explanations for the title. Of course there would be two — Jackson’s stunning show is recursive, redundant, reflective, reflexive. As Usher, Jackson’s composer hero, sits on a subway explaining his own musical (also called A Strange Loop) to a stranger, he cites Douglas Hofstadter’s book about “loops” of identity-constructing self-reference. That checks out, you think: Loop is an Escheresque musical by a gay Black man about a gay Black man writing a musical about a gay Black man writing about himself. “But it’s also the name of this Liz Phair song that I really love?” Usher tells the guy, flirting. “I was gonna use a bunch of her songs in the show but then she wouldn’t give me permission.”

At breathtaking speed, for an hour and 45 minutes, Loop continues whirling on like this: the Big Ideas and the petty ones waltzing around in Jackson’s profane, hilarious, metamusical carousel. It’s less vicariously exhausting than it was Off Broadway, perhaps because the company no longer wrecks itself physically with every performance — but it’s still furious, both with the world and itself. The shock of that sharp emotion strikes like a lance. Especially in the Lyceum Theater: It’s a red-velvet-and-gilt balloon, and Jackson makes it go pop.

The plot, if that’s the right word for something so scattered, is about an usher named Usher (Jaquel Spivey) who works at a show much like The Lion King. (Jackson once ushered at The Lion King.) As Usher plays the Disney-approved return-to-your-seats chime, he also does battle with own brain. His six swarming Thoughts — including Daily Self Loathing (James Jackson Jr.), Sexual Ambivalence (L Morgan Lee), and Financial Faggotry (Antwayn Hopper) — nag and chasten him; they pester him about his inability to finish his musical, to satisfy theater’s gatekeepers, and to pay his loans.

One of his Thoughts embodies an agent (John-Michael Lyles) who urges him to ghostwrite a Tyler Perry gospel play; Usher recoils at the idea. Another disappointed internal voice (Jason Veasey) calls out of his head: “Usher! Head of Corporate Niggatry here! Just checking in to see if you found your unapologetic blackness yet? ’Cause your numbers are in the toilet with the Black excellence crowd and you’re real close to cancellation!” Usher bings his little chime and rolls his eyes. Under his bandbox uniform, Usher wears a #bellhooks T-shirt, so it’s no surprise that he flinches at capitalizing on his Blackness. In fact, he both cherishes and resists his “inner white girl,” not just because he loves Liz Phair, but because white femininity is permitted all the things he’s denied — interiority, shyness, self-celebration.

The predicament of being observed and being one’s own observer are not issues you usually grapple with in a Broadway theater, and actually Jackson covers that stuff pretty fast. Where he goes deep is a particular anguish:

He wants to show what

And travel the world in a

Usher has homophobic parents whose beliefs negate him even as they say they are lifting him up. His mother (the excellent John-Andrew Morrison) calls him often, and these talks alternate between syrupy outpourings and ice-cold denials. Gay men treat him no better. Usher is trying to find a match, but he’s “Too Black,” the Grindr/Scruff/Adam4Adam users say. “Fuck outta here, porch monkey.” An introductory song promises “Black shit! And white shit! … With code-switching and butt-fucking! There will be butt-fucking!” Yet when the promised intimacy actually does roll around, it is a surprise and — given the man who sleeps with him — an act of masochism.

The circularity of Jackson’s project means that it’s difficult for it to progress towards an ending. Usher wants love from his family; his family hurts him. Repeat. Usher wants to be touched; the touchers hurt him. Repeat. The ensemble and director Stephen Brackett do accelerate over the course of the evening, so Usher’s worries chase each other faster even though they still move in a circle.

In a revelation-of-space trick Brackett resorts to late in the musical, the Thoughts’ dull gray portals (designed by Arnulfo Maldonado) roll away and we see a showy, hidden “reality.” Instead of astonishing us, the sped-up, even rushed pacing hiccups towards the end, as though the musical is running off its feet. Spivey also loses us when he rattles off an entire Tyler Perry–ish scene, playing all the parts, including the requisite “spirit-cha-alities” and contempt for gayness. This material isn’t as crisp as it once was, or perhaps it’s that Spivey is so good at playing things small — a naughty little pursed lip, a glance sliding sideways at the audience — that spectacle doesn’t suit him. In terms of his sound, though, there’s no mountain too high: Spivey’s voice sails effortlessly into the rafters, even as he’s desperately wiping his brow. In fact, the whole astonishing company charges through Raja Feather Kelly’s choreography without ever breaking a (vocal) sweat.

The loopiness of Loop’s self-reference has increased in a Broadway house. Part of its original conceit was its own transgression, the impossibility (it thought) of actually breaching the institution’s walls. The “inside baseball” nature of many of Jackson’s jokes made it seem constitutionally Off Broadway: You don’t (or at least didn’t) make cracks about Scott Rudin if you think you’ve actually got a shot at a Tony. Coming into an expensive room has disrupted some of the delicately balanced pressures, the awful equilibrium between external forces (anti-Blackness, Christianity, bills) and Usher’s own internal experience of them. How does the meaning of Strange Loop change once it gets to the Big Time? Usher, Jackson’s avatar, must beg for affirmation, but Jackson himself has now won a Pulitzer.

Perhaps there’s a universe in which Jackson could have widened the show’s own representative spiral, to include the perplexities of being rewarded by the Establishment. Or maybe fame and attention change that Loop forever, wrenching it into a new shape, which would be unrecognizable here. My answer to the musical’s very few frustrations is to cast my mind back to its first 20 minutes, which, each time I hear them, still seem eternally surprising and brand-new. In his first song, Usher is still wrestling with what to write about, his Thoughts trying to get his attention and bickering with one another. “Some say write from exploration / Some say write from what you know,” he sings, wondering which way to go. Usher still sounds unsure in these moments, like he might choose another path than the one he follows next. We know what happens to Usher because we know what happens to Michael R. Jackson. But the musical doesn’t know that yet — and at this point, the fabulous, piety-smashing Loop still feels as exhilarating as your first trip on the merry-go-round.

A Strange Loop is at the Lyceum Theater.

A Strange Loop Moves to Broadway, Energy Changed but Intact