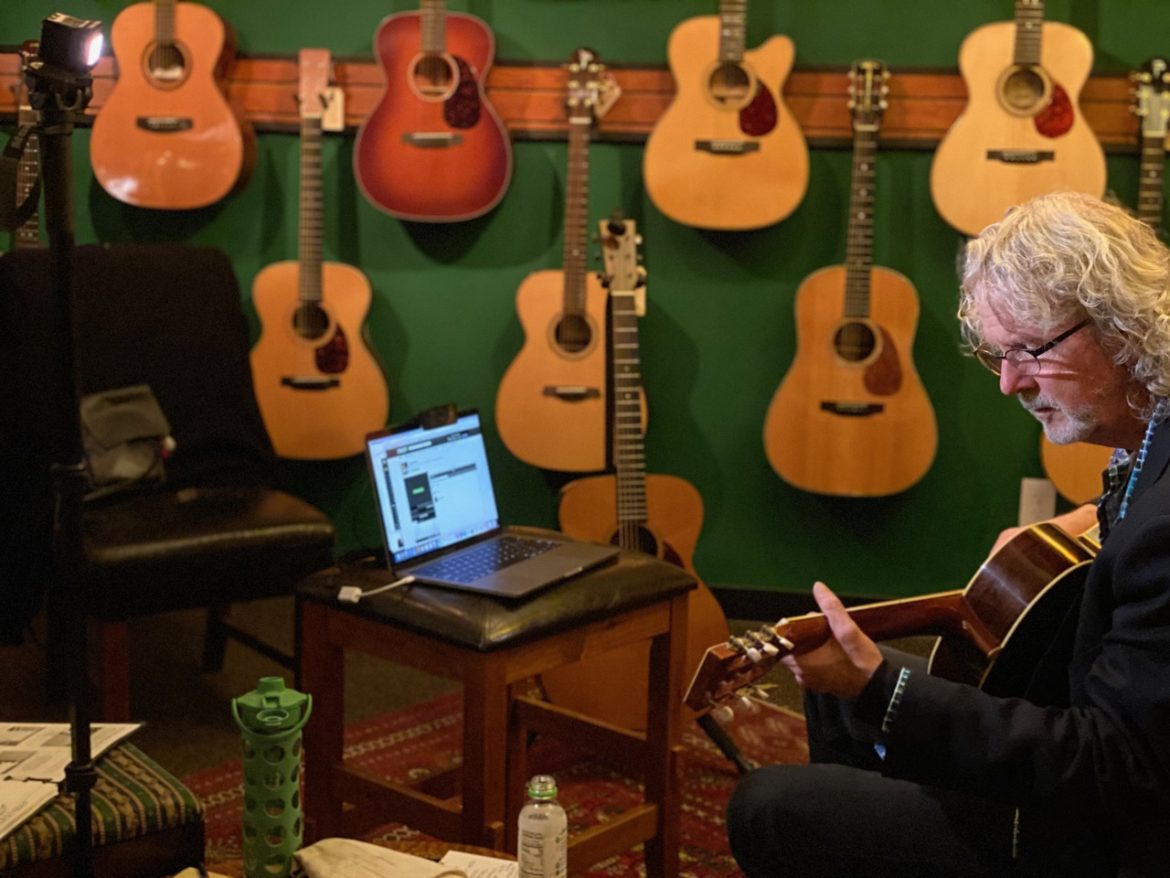 Stevie Coyle live-streaming from a laptop; photo by Valerie May

Hey, fellow guitarist! AcousticGuitar.com is here to support you with fantastic articles (like this one.) If you like what we do, please give $1 (or whatever you can afford) in support of our work.

Live streaming—performing live via video over the internet—has been growing in popularity for a while, but is surging with the current global health crisis. With musicians locked down at home along with everyone else, streaming is replacing lost gigs, providing entertainment, and allowing musicians to connect musically with others.

For viewers, streaming offers some of the same appeal as live performances. Unlike videos posted to YouTube, which may be carefully edited and produced, streamed video is shown as it happens. Although the result is often less polished, there’s an undeniable charm to seeing people like Paul Simon, Willie Nelson, Steve Martin, and Mary Chapin Carpenter performing casually from their homes, often using nothing more than their phones.

The good news is that anyone can stream over the internet, on equal footing with the bigger name stars. If you’d like to jump in and start streaming, this article will get you started. We’ll talk about where to stream, the gear you need, and also get some tips from musicians who have been doing it.

Here’s a guide with links to the sections in this article:

Where the Streams Are

Where to post your stream depends on your goals as well as your potential audience. Facebook is one of the most popular options, along with Instagram, Twitter, and other social media platforms. Although people can watch the video live as you perform, the final result usually lives on as a video post that people can continue to watch, share, and comment on. YouTube also offers a live streaming option and there are dozens of other sites dedicated to streaming, including Vimeo and Twitch. There are even services, like Restream or StreamYard, that allow you to simultaneously stream to multiple destinations at once. StageIt is another popular platform that offers a ticketing system to allow you to easily charge for your performances. In a different category, there are web-conferencing programs like Skype, Zoom, FaceTime, and even Facebook Messenger that support real-time video streaming and interaction with a specific set of people.

The best choice depends on your goals and possibly how connected you are on these platforms. For example, if you have a lot of Facebook friends, they will typically be notified as soon as you start a live stream, prompting them to join you, and your video will appear in your feed. Facebook also offers groups—communities of people who share a common interest—that you can stream to. For example, Tommy Loose and Jon Hart, the creators of an 18,000-member Facebook group named “Fingerstyle Hub,” recently organized an online live music festival for their group. The event, which is expected to repeat periodically, was advertised on the group page. Individual performers streamed short 15-minute live sets at pre-scheduled times, creating a sequence of live shows. Each musician announced the next act, who would then start their stream. Jon Hart explains that the approach helps “keep the momentum between performers” and keeps listeners engaged.

YouTube is a somewhat different environment. Unless you have a YouTube channel with a lot of followers, people are unlikely to just stumble on your live stream. As a result, YouTube probably works best if you want to schedule an event for a specific time and promote it yourself. For example, Grammy-award-winning guitarist Al Petteway recently streamed a concert in conjunction with the Keep Music Alive project and Dream Guitars, both of Asheville, North Carolina, using YouTube. Petteway and Dream Guitars promoted the event via Facebook and their own email lists, and used Eventbrite to manage attendance, providing the YouTube url to registrants.

Streaming isn’t just about live performance. For example, guitarist and author Mark Hanson, who is highly regarded for his in-person workshops, turned to Zoom as a way to continue teaching through the current restrictions. Zoom is widely used in business settings for video conferencing, and allows anyone to set up a video meeting of typically up to 100 participants. Hanson advertises his workshops to potential students via his mailing list and website, as well as on Acoustic Guitar’s Livestream Events Calendar, and sells advance tickets using Eventbrite.

Gear: What Do You Need?

Regardless of where you choose to share your live performance, the gear you will need is similar. The simplest way to start streaming is to use a smartphone or tablet. Most relatively recent smartphones can produce impressive video, and you can stream right from your device. Starting a streaming broadcast can be as simple as clicking a button in the corresponding app. Facebook, for example, has a “Live” button right below the status update section at the top of your feed. Similarly, You Tube’s Create button gives you a choice of uploading a video or starting a live stream. You can literally be streaming in seconds if you have these apps on your phone or tablet.

Another easy option is to use a computer equipped with a webcam. The process is quite similar. Just find the button to go live on the desired website, and you’ll be broadcasting in seconds.

Audio quality can be an issue with both phones and webcams. The built-in microphones are more than adequate for voice conversations or casual recording, and can even do a credible job for music when positioned right. However, you will probably end up with the camera some distance away in order to frame yourself and your instrument in the picture, which can lead to a thin, distant sound. Stevie Coyle, guitarist and proprietor of Mighty Fine Guitars, has been streaming shows from his store for years and recommends using an external microphone, which he says “really cleans up the sound.” Most streaming platforms allow you to choose a separate source for the video and audio. Coyle uses a Blue Yeti USB mic, as well as the Blue Raspberry, which supports a Lightning connector for iOS devices as well as USB.

If you are adventurous and want to try to produce a higher-quality stream, you have many other options, although things can get complicated quickly. You can use audio from an audio interface, such as the Focusrite Scarlett 2i2 ($159), on a computer so that you can use higher quality microphones. There are also audio interfaces that can be used with mobile devices, like the Focusrite iTrack Solo ($129.99), IK Multimedia iRig Stream ($99), and Apogee Duet ($649). On the video side, there are ways to use higher-quality cameras. Al Petteway plans to use a Magewell USB Capture HDMI box ($299) to connect a more professional-quality camera for future shows. Keep in mind that internet bandwidth and limitations of the streaming platform you use may not allow you to fully realize the benefits of higher-quality gear.

Another advanced option is to use software on a computer that collects all your audio and video sources and connects to the streaming platform. For his concert, Petteway used OBS (Open Broadcaster Software), a free software package that lets you control and switch between multiple cameras and audio inputs and stream to your destination. Using OBS requires a more complex setup. For example, on Facebook, instead of selecting your webcam, you generate a “Stream Key” and a URL, which you need to enter into OBS.

Regardless of the gear you use, here are a few tips for making your show go smoothly:

For many musicians, streaming is a way to connect with others, share their music, and especially in these challenging times, help make people feel a little better. But with the coronavirus temporarily ending all live performance opportunities, many working musicians need to replace income from lost gigs. While live streaming can be a promotional tool, and perhaps help sell CDs, that only goes so far. Here are a few approaches to generate income from streaming:

Gently Down the Stream

Whether you want to stream for fun or for profit, it can be surprisingly easy to start streaming your music and sharing it with the world. In this stressful time, it’s a great way to connect with other musicians, reach your audience, and brighten the day of people who are unable to attend the kinds of live events they have enjoyed.

Please note this piece contains affiliate links, meaning Acoustic Guitar will earn a small commission (at no cost to you) when you click through and make a purchase. Thanks for your support!

And, to learn more about how you can support this site, please click here.