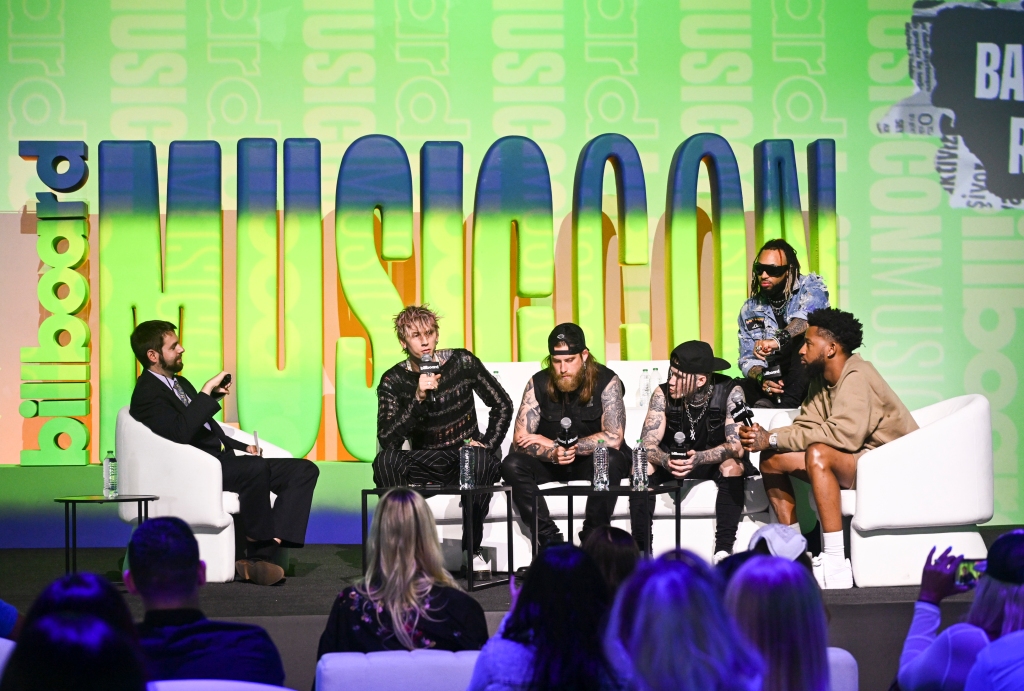 Rap and rock star Machine Gun Kelly joined Billboard‘s MusicCon event on Friday (May 13), along with his band — guitarist Jus Lyons, drummer Rook, bassist Baze and keyboardist Slim — to participate in the closing “A Decade of Touring” panel, in advance of both their performance at Sunday’s Billboard Music Awards, and their own upcoming headlining arena tour in support of Billboard 200 albums chart-topping new album Mainstream Sellout.

MGK was his typically animated self during the panel discussion, at multiple points getting up from his seat to walk around the stage, and also giving the panel’s host, Billboard executive editor of music Jason Lipshutz, a mock blow to the arm with his microphone (along with an accompanying “boop“). When talking about prepping for their upcoming tour, MGK said he and his band have a division of labor to handle their new arena-level responsibilities.

“They handle the music, I handle the fans,” he explained. “Like, how we’re going to maintain the connection. Because the bigger the venues get, the less the connection is. But not in our case.”

Here are the five most memorable moments from Machine Gun Kelly’s MusicCon discussion, including his band’s strict award show performance policy, his perfectionist nature, and his dream venue (which isn’t really a venue).

Midway into Lipshutz’s second question on the night, Kelly interrupted the host to ask for a time out. “Can I stop you real quick? We just made a movie…” he began to explain, before pulling out his phone to post about the new flick on Instagram. “Made a movie with my friends. Good Mourning May 20th,” he captioned the post, before realizing that the line break in the caption had a line break after the “Good” in the title. “I hate it when you make a caption and it separates the lines,” he bemoaned, before asking the audience, “Should I edit it?”

MGK and his band shared the stories of how they all linked up with one another, with the frontman calling drummer Rook’s onboarding story the most legendary of the group, and explaining that Rook left high school to audition for the band and never went back. “He actually just got his high school diploma!” Kelly announced to a warm reception from host and audience, before revealing, “Nah he didn’t, I’m just f–king with you.”

Stripping Down at Warped Tour

In his band’s pre-arena days, MGK says he would still make a point to do what was necessary to capture a crowd’s attention — even when they were playing the tiny Ernie Ball stage at the Warped Tour, which most festival denizens would merely pass by in order to get to the show they really wanted to attend. “I would take my clothes off and just be in my boxers, and I would just have this lanky, stupid body…” he recalls of his extreme measures to grab eyeballs (with Slim chiming in that he would also follow suit). “But it made people stop.”

When asked about their remaining live bucket list items, Kelly’s band ticked off a number of understandable goals, like performing at the Grammys and headlining Madison Square Garden (which they’ll do on this upcoming tour.) But MGK had a more unusual venture in mind: “I wanna perform on all seven continents. And then I want to perform in the ocean. Like, underwater. I don’t think anyone’s done it.” (He then got up to do a little fish wiggle dance, explaining and demonstrating how “all the sharks and puffer fish” passing by would be grooving to the tunes.)