There may be no more moving things in this world Heartfelt loss and the uplifting power of music. Fortunately, we got a bit of both over this past weekend when over 1,000 musicians gathered in Paris at the Stade de France for a Rockin’ 1000 concert that was highlighted by an impactful tribute to late Foo Fighters drummer Taylor Hawkins.

While the concert featured musicians from 25 countries gathering together to perform classics from The Who, Pink Floyd, Rage Against the Machine and Guns N’ Roses among others, it was their salute to Foo Fighters drummer Taylor Hawkins on “My Hero” that stole the show.

It’s also no surprise at all that Foo Fighters would be included somewhere in their setlist, as the whole “Rockin’ 1000” idea was birthed in late 2014, and realized in early 2015 when 1,000 musicians gathered together to learn and perform Foo Fighters’ “Learn to Fly” in hopes of catching the eye of Dave Grohl and receiving a Foos show in Cesena, Italy. The viral video did catch the band’s eye and achieve the goal of getting the Foo Fighters to Cesena, with some of the band members being invited to play with them.

The Foo Fighters association continued with Rockin’ 1000 organizing a cover of the Foo Fighters then new song “Saint Cecilia” as well. Over time, the idea has expanded to include more performances, and the Saturday show (May 21) in Paris marked their first performance in nearly three years.

For this performance, Alex Deschamps served as conductor for the massive undertaking. And while many of the performers were not known names, Fever 333’s Aric Improta, Telephone drummer Richard Kolinka and radio host Emilie Mazoyer were among those on hand to participate.

The choice of “My Hero” was a poignant one for the group, as Hawkins’ beats definitely pushed the song forward and the drummer himself served as an inspiration to many. The tributes since Hawkins’ March 25 death have been plentiful, but this one should end up being one of the more memorable ones due to its size and scope. Check out the Rockin’ 1000 performance of “My Hero,” and check out the gallery below to view just how big an undertaking this production was.

So many wanted to be part of this special moment. 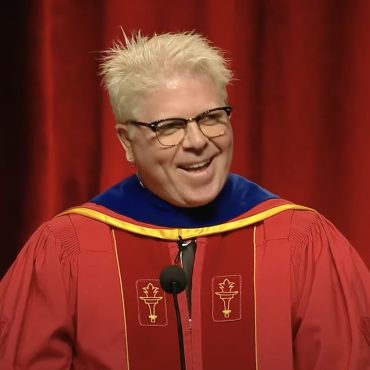 UPDATE: (May 25, 2022) The Offspring's Dexter Holland has delivered his commencement speech at USC's Keck School of Medicine. He discussed his love for both music and science and even worked in a pun that tied the two together, ironically referencing the lyric "You've gotta keep 'em separated" in the song "Come Out and Play." Video footage of the speech can be viewed toward the bottom of the page.In this […]